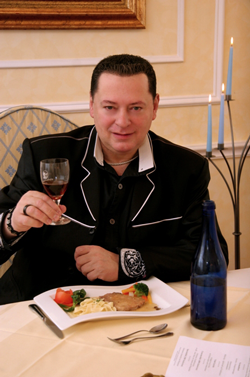 Justin was born in Slovakia, but lives predominantly in the USA. He started his career as a child star on Czechoslovak radio and then later on TV. As a nine year old he starred in his first film - The secret of the iron box -directed by Haspra. He has worked in the music industry for a number of years, has had a number of hits and was a very successful member of the well known Prague Semafor theatre. Nowadays his working activities are divided between New York and Bratislava.

At the beginning of the 90’s Justin started to collaborate with TV Markiza on a show called The Observatory and later the international Tastes of the world saw the light of day, a show that is a four-time award winner at the prestigious Znojemský hrozen international gastronomical film and radio festival in Znojem.

Singer and presenter Justin Topolský resides on two continents. Sometimes dwelling in Bratislava and then returning to his second home in New York. Complaining about a lack of responsibilities is something that is out of the question for Justin: he is currently once again preparing his popular cooking show for connoisseurs Tastes of the world and is also working on a new musical project with singer Jana Daňova.

I am a gourmet, that’s why I have to fight to keep in shape. When exercising, harmful toxins exit the body and the time spent in the gym only puts me in an even better mood. Work really takes up a lot of my time, meaning that on no more than a couple of occasions per week can I perform my favorite activity. I always spend at least an hour and a half in the gym. In New York I go to the huge Chelsea Piers fitness centre. It’s actually quite pleasant to sweat it out on exercise bikes and gaze at the statue of liberty at the same time. In Bratislava I am a regular at the Mladost fitness centre.

As a nine year old I played my first leading role in the Hapra film The secret of the iron box. As a reward for my performance I received what was then an amazing pay cheque – 2990 Crowns. I was delighted and I bought a new pair of skates (from Canada) and a guitar. And it is to this love that I am the most faithful. I love singing and playing. I always have one guitar waiting for me in Bratislava, and of course – another one in New York

I enjoy tasting and getting to know new kinds of wine. I like red wine from California, Argentina and Uruguay the most. I totally avoid alcohol throughout the day. It’s important to find the right time when it comes to wine, and that time is usually after sunset